I made this last night and it was delicious. Used a prior reviewer’s suggestion and made it in a round 2-qt casserole dish instead of a 9×13-inch pan, to avoid having a dry casserole (other than that I followed the recipe exactly). Like previous reviewers have commented, it was just a tad on the dry side. Wasn’t so dry that my fiance and I didn’t enjoy eating it (it was really tasty!), but could use about half a can more soup. I used red onions which made for a colorful dish. I will definitely be making this again – it’s a keeper – but next time I’m going to add 1/2 can more soup to it.

Very Good! I usually just “wing it” when it comes to making tuna casserole, but there is a first time for everything, and I actually followed a recipe this time! As other reviewers stated, I too added some milk to make it more creamy. I then added about a 1/4 cup of miracle whip as well for a little zip, then I did my usual doctoring with onion and garlic powders. Instead of using potatoe chips on top I used crushed crackers that I pulsed a few times in the food processor with some melted garlic butter. The end reult was a very yummy tuna casserole. 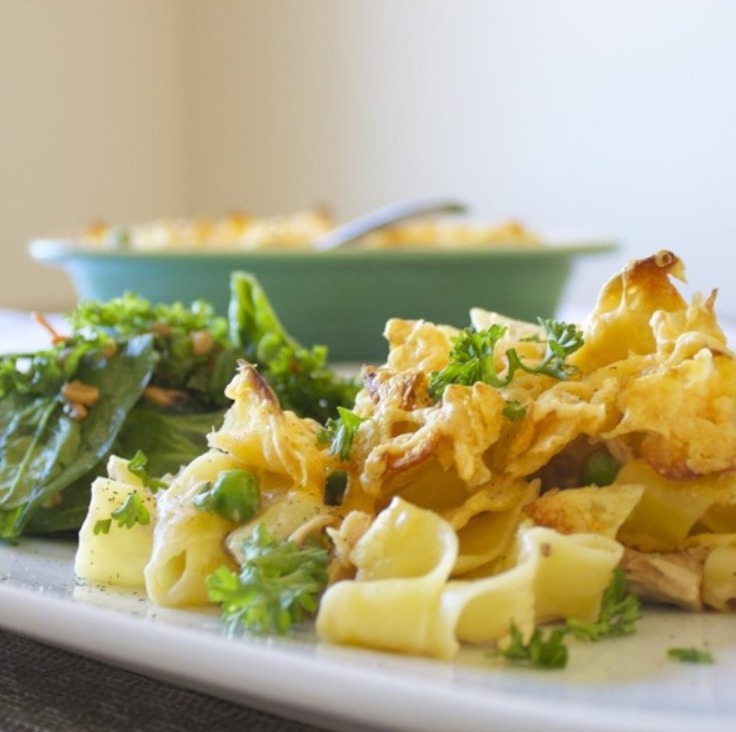 I ENJOYED THIS TUNA CASSEROLE. I PREPARED IT FOR MY MOTHER AND I AND IT WAS ENOUGH FOR AT LEAST 6 PEOPLE. AFTER READING THE REVIEWS ABOUT THE CASSEROLE BEING DRY AND BLAND, I MADE SOME ADJUSTMENTS. I USED A FAMILY SIZE CAN CREAM OF MUSHROOM SOUP, I PUT A LITTLE EXTRA SALT IN THE BOILING WATER THAT I COOKED THE NOODLES. I MELTED 1.5 STICKS OF BUTTER IN A SAUCEPAN AND SAUTED MY ONIONS BECAUSE I DID NOT THINK 20 MINUTES WOULD GET THEM AS TENDER AS I PREFER. OF COURSE, I ADDED THAT BUTTER TO THE MAKING OF THE CASSEROLE AS WELL. I INCREASED THE AMOUNT OF ONION CALLED FOR IN THE RECIPE TO HALF OF A LARGE ONION. I USED SHARP CHEDDAR CHEESE AS WELL FOR ADDED FLAVOR. I INCORPORATED ALL THE CHEESE INTO THE CASSEROLE AND JUST USED CRUSHED POTATO CHIPS ON TOP. I DID NOT DRAIN THE TUNA, I USED THE JUICE AS WELL TO HELP WITH THE BLAND TASTE THAT WAS MENTIONED IN SEVERAL REVIEWS. I REDUCED THE OVEN TEMP TO 350 DEGREES AS WELL TO KEEP THE CASSEROLE FROM DRYING OUT AS MUCH. THE RESULT WAS EXCELENT!!!

I’m not a big fan of Tuna casserole but I gave this one a try, with a few modifications it came out a 5 star recipe. My father in law told my mother in law to step aside and let me cook it from now on. He told everyone it’s the best F’n Tuna casserole he’s ever had…. I guess that about sums it up : ) This is what i changed, I seasoned the mixture with johnnys, I did NOT add mushrooms, I used one can of cream of mushroom and one can of cream of celery, i sauteed the onions in a little bit of butter and also some celery, I added some canned corn in addition to the peas and more cheese to the mixture than it calls for. Best I have ever had.

Oma’s Brown Sugar Cookies Will Carry You Into The Clouds

This website uses cookies to improve your experience while you navigate through the website. Out of these, the cookies that are categorized as necessary are stored on your browser as they are essential for the working of basic functionalities of the website. We also use third-party cookies that help us analyze and understand how you use this website. These cookies will be stored in your browser only with your consent. You also have the option to opt-out of these cookies. But opting out of some of these cookies may affect your browsing experience.
Necessary Always Enabled

Any cookies that may not be particularly necessary for the website to function and is used specifically to collect user personal data via analytics, ads, other embedded contents are termed as non-necessary cookies. It is mandatory to procure user consent prior to running these cookies on your website.

We've noticed that you are using an ad blocker. Please disable your ad blocker. Thank you for your support :)